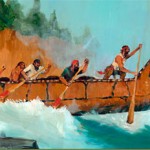 The first inhabitants of Minnesota were Paleo-Indians as early back as 7,000 to 9,000 years ago. The Dakota (Sioux), and Ojibwe (Chippewa) Indians arrived later from the North and East. Nordic Vikings may have visited Minnesota in the 1300’s, but the only evidence of this is the controversial Kensington Runestone which was discovered in 1898 near Alexandria, MN.

The first documented Europeans to set foot in Minnesota were French-Canadian voyageurs and fur traders who arrived as early as the 1600’s from the East. The geography of Minnesota created an ideal habitat for animals that produced high quality furs and was a primary reason that fur traders were willing to come from such long distances in these early years.

In 1805, Zebulon Pike negotiated a deal with Native Americans for land at the intersection of the Minnesota and Mississippi rivers. Construction of Fort Snelling followed between 1819 and 1825. The land east of the Mississippi was ceded to the U.S. in 1837; settlers and immigrants from the East began arriving to stake their claims in this new territory.

Early Explorers and Missionaries (by Year)

A listing of the early settlers who arrived before 1849, the year that Minnesota Territory became a part of the United States.

Pierre Pepin and Jean Pepin du Cardonnets, later explored and traded in this area, and their name somehow became attached to the lake, and ultimately to the village and the county.