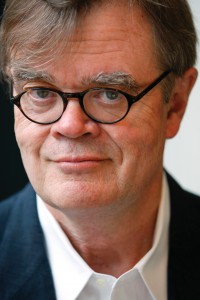 Garrison Keillor is a true Minnesota treasure! His literary stylings are reminiscent of other great Minnesota writers like Sinclair Lewis and F. Scott Fitzgerald.

Garrison was born and raised in Anoka, MN. He started his radio career while a student at the University of Minnesota, where he graduated from with a degree in English. He started his professional broadcast career in November 1969 with Minnesota Educational Radio (MER), now Minnesota Public Radio (MPR) and was host of “The Morning Program” at St. John’s University in Collegeville, MN. In 1971, his radio show became known as “A Prairie Home Companion”.

Garrison Keillor writes compassionate stories about life in small town Minnesota based on his life experiences here. Lake Wobegone and the characters, places and the stories that he has created are far less fictional than one might think.