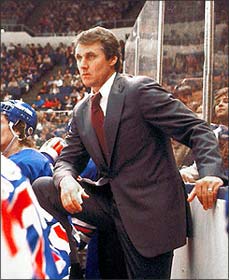 How does a kid from East St. Paul, MN end up as an internationally recognized sports figure? For Herb Brooks it was all about hard work and perseverance, but it certainly didn’t hurt to be in the right place as coach of the 1980 U.S. Olympic Hockey Team.

Most people are aware of the Gold Medal winning “Miracle on Ice” hockey team. Fewer people are aware of Herb Brook’s hockey career leading up to 1980. During these earlier years, Brooks played on two U.S. Olympic teams, and participated in five World Championships between 1962-70. In 1972 he became head coach of the University of Minnesota Golden Gopher hockey team, and took them to three NCAA championships.

By 1980, he had proven himself to be a very good college hockey coach, but there was little about him that gave the appearance that he was destined to become a internationally recognized sports figure. This all changed when he became the head coach of the 1980 U.S. Olympic Hockey team.

In 1980, the Olympic rules stipulated that only amateur athletes could compete. There were no professional athletes allowed at this time. As a result, the U.S. team, which was hand-picked by Herb Brooks, came from a pool of college aged amateur players who either worked during the day, or received financial support from their parents.

The Soviet (Russian) team on the other hand, were all members of the Russian army and were financially provided for by their government. Their only responsibility in life was to eat, sleep, and breathe ice hockey, day-in/day-out, year after year. The Russian team wasn’t the only Olympic team that used “professional amateurs” at this time, other communist countries like Czechoslovakia were doing the same.  For some odd reason, in the eyes of the Olympic Committee, they were still considered “amateurs”.

This placed the U.S. team way behind the curve in terms of training time in comparison to the “professional amateurs”. As a result, the 1980 U.S. Olympic hockey team were facing seemingly insurmountable odds of winning. They had about six months to prepare for the Olympics and this presented Herb Brooks with the challenging task of getting everyone ready to play.

In an interview Brooks once said, “I’m looking for players whose name on the front of the sweater is more important than the one on the back. I look for these players to play hard, to play smart and to represent their country.” Obviously Brooks knew that character was going to be a huge component for success.

The essence of Herb Brooks can be found in his many remarkable speeches and quotes. In the movie “Miracle” we have some insight into how he may have motivated the 1980 U.S. Olympic Team right before they stepped on the ice against the Russians. The speech in the movie is likely slightly different than the one he actually gave in 1980, but the movie version captures the essence of Herb Brooks as a coach and leader.

The movie version is as follows, “Great moments…are born from great opportunity. And that’s what you have here, tonight, boys. That’s what you’ve earned here tonight. One game. If we played ’em ten times, they might win nine. But not this game, not tonight. Tonight, we skate with them. Tonight, we stay with them… and we shut them down because we can! Tonight, we are the greatest hockey team in the world. You were born to be hockey players. Every one of you. And you were meant to be here tonight. This is your time. Their time is done. It’s over. I’m sick and tired of hearing about what a great hockey team the Soviets have. Screw ’em. This is your time! Now go out there and take it!”

In later interviews, Brooks said of his 1980 team, “They were really mentally tough and goal-oriented. I pushed this team really hard, I mean I really pushed them! But they had the ability to answer the bell. We were a fast, creative team that played extremely disciplined without the puck. I think we were as good a conditioned team as there was in the world, outside maybe the Soviet Union. We got hot and lucky at the right times, and it was just an incredible experience for all of us.” 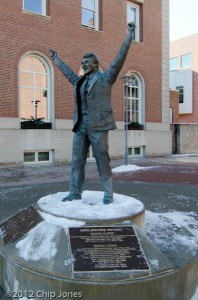 Shortly after the Olympics and the resulting Gold Medal, Herb Brooks entered the NHL coaching ranks, first with the New York Rangers, where he was named NHL Coach of the Year. After five seasons he came back home to Minnesota to take over the reigns at St. Cloud State University and took the program to a Division One status the next year. He then took over the head coaching duties with his hometown Minnesota North Stars in 1988. His coaching career lead to NHL head coach positions with the New Jersey Devils (1992), Pittsburgh Penguins (1999-2000). He would later lead another U.S. Olympic team to a medal (silver) in the 2002 Olympics in Salt Lake City.

In August 2003, Brooks was tragically killed in a one car crash after falling asleep at the wheel. He was just 66 years old. In February 2004, a statue of Herb Brooks was erected in downtown St. Paul, near Rice Park. It depicts his reaction after winning the “Miracle on Ice” game.

The statue is located across from another famed Minnesotan, author F. Scott Fitzgerald. Ironically, it was Fitzgerald who wrote the now infamous line: “Show me a hero and I will show you a tragedy.”

Herb Brook’s remarkable legacy continues on in Minnesota, and the rest of the world. He has earned a well-deserved place as an immortal in sports history.