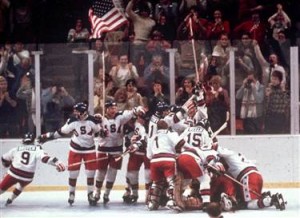 “Do You Believe in Miracles?” Photo: AP

The “Miracle On Ice” 1980 Olympic hockey game between the U.S.A. and Russia is regarded as one of the greatest upsets in sports history. It took place on February 22, 1980 and was played between amateurs (the U.S.) and professionals (Russia). The U.S. team was a huge underdog going into this game, but they ended up beating the Russians by a score of 4-3.

What’s less known about the “Miracle On Ice” team is that it was made up of mostly Minnesotans, with 13 of the 20 players on this team born in Minnesota.  The team was led by coach Herb Brooks, a Minnesota native who had coached the University of Minnesota Golden Gopher hockey team to three NCAA National Championships leading up to the 1980 Olympics.

Much has been written and said about the “Miracle On Ice” game, but what’s unfortunate is that younger generations may not fully appreciate why this was such a huge game, both athletically and politically. The “Miracle on Ice” game became a symbol of American resolve in an era of apathy and growing U.S. / Soviet tensions. This game became a catalyst of national pride during a very uncertain period in American history.

The following is a list of Minnesotans that were part of the 1980 “Miracle On Ice” U.S.A. Olympic Hockey Team:

Non-Minnesotans that were part of the 1980 “Miracle On Ice” U.S.A. Olympic Hockey Team included: