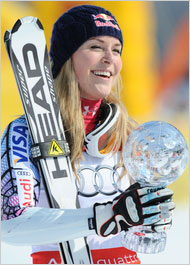 Putting an exclamation point on a season of unprecedented achievements, Lindsey Vonn won her third consecutive World Cup overall title Friday with a victory in the super-G at Garmisch-Partenkirchen, Germany. Vonn now has 33 World Cup wins, the most for an American skier. Bode Miller has 32. Lindsey Vonn has 11 World Cup victories this season and two Olympic medals.

The most dominant female ski racer in the world the last two winters, Vonn entered this season seeking career-defining triumphs. With 11 World Cup victories this season and two Olympic medals, including a gold when she became the first American to win the women’s downhill, Vonn has established herself as the most successful American woman skier in history.