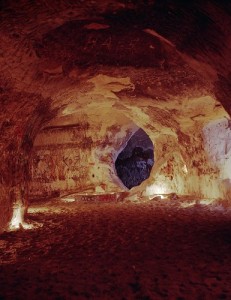 If you like exploring caves (spelunking), Minnesota may be a great destination for your next journey. The caves in Minnesota are not only an interesting geological feature, they’ve also helped shape the history of our region.

Many of the caves in the Twin Cities are man-made due to mining in the late 1800’s, but natural caves exist along the Mississippi River from the Twin Cities down through parts of southeast Minnesota. These caves have been naturally carved out of limestone or sandstone.

In the Twin Cities, Schieks Cave is the largest natural cave located under downtown Minneapolis. It was first discovered in 1904 by Carl J. Illstrup, a city sewer engineer. It is located under the city block at Marquette and 4th Street South. News of this underground cave was reportedly kept a secret for years because city officials feared the public would think downtown Minneapolis was built on a thin shell that would plunge into a hole in the earth.

In St. Paul, the first urban settlement was actually located at the entrance of a cave known as “Fountain Cave”, right by the Mississippi River. It was discovered by Pierre “Pig’s Eye” Parrant. Another St. Paul cave is the infamous man-made cave, the Wabasha Street Caves (formerly “Castle Royale”). Opened to the public in October 26,1933, “Castle Royale” was frequented by mobsters like Ma Barker, Baby Face Nelson and John Dillinger. It is still open today for tours and events. 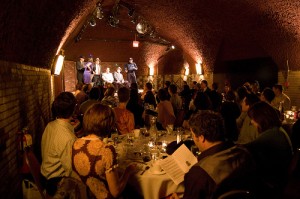 Many caves in the Twin Cities have been sealed due to safety concerns, although a few are still accessible. As recently as 2005, deaths were reported in Twin Cities caves due to carbon monoxide poisoning. According to officials from the city of St. Paul, “there are [cave] entrances and exits that we don’t even know about.” (AP – Apr 29, 2004).

In Southeast Minnesota, most caves have been naturally carved out of limestone. These include Mystery Cave which is located close to the southern border of Minnesota, and Niagara Cave in the Southeast corner of Minnesota. Mystery Cave is one of the largest cave complexes in North America with more than 13 miles of passageways.

For more information about the caves in Minnesota, be sure to visit The Minnesota Speleological Survey. If you venture into a cave, please bring protective clothing, proper equipment and most importantly, make sure that the cave has plenty of oxygen. If the cave is known to have low oxygen levels, then be sure to bring oxygen with you. Have a great time spelunking in Minnesota!