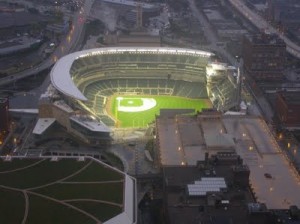 The Minnesota Twins are still a week away from the start of their first game at Target Field (a pre-season game against the St. Louis Cardinals), but on Saturday March 28th, 2010 the first baseball game was played at their new home – Target Field.

A total of 37,757 fans paid $2 to come through the turnstiles at Target Field on Saturday to get their first glimpse at the new ballpark. It was a college game between the University of Minnesota and Louisiana Tech, which Louisiana Tech won, 9-1.