Home > Mike Modano and the State of Hockey in Minnesota 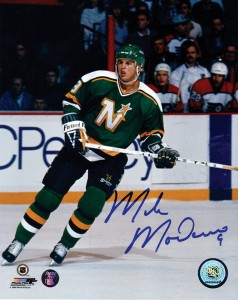 On April 10, 2010 Mike Modano was in St. Paul with the Dallas Stars to play the Minnesota Wild in what could have been his last NHL game as a player*. Mike Modano was at one time the face of NHL hockey in the State of Hockey – Minnesota.

Over the past 21 years, Mike Modano, the Minnesota North Star turned Dallas Star, has become one of the most consistently great players in the NHL. His contract with the Dallas Stars is up at the end of this season, and at age 40 he may have reached the end of the road as a player in the NHL.

The irony is that he may have ended up playing his last NHL game as a Dallas Star in front of many of the same Minnesota North Star fans that witnessed his start in the NHL 21 years ago. In fact, he is the only remaining player from the Minnesota North Star hockey team that moved to Dallas in 1993.

The years prior to Mike Modano’s arrival in Minnesota had been inconsistent for the North Stars. At the time of his arrival, the North Stars had played in Minnesota for 21 seasons, and had finished twice in first place, and only made it to the Stanley Cup Finals once (in 1981). Attendance and interest in the team was on a steady decline by 1988.

When Mike Modano was drafted in 1988, he was perceived as someone who might be able to turn the North Stars into a more consistent winner that would draw more fans. After his arrival, the team managed to put together four play-off seasons, and they reached the Stanley Cup finals for the second time in 1991. But interest in the team had already waned too much by the early 1990’s and the North Stars were having a tough time selling tickets, even for play-off games.

Disenchantment about the franchise had been growing because the owners (Gund brothers) threatened to move the team West unless they could secure public financing to build a better revenue generating arena in the Twin Cities. This fell on deaf ears and in 1990 the team was sold to a group of owners, one of whom would eventually become the majority owner, Norm Green. Green did his best to try to prop-up attendance with free give-aways and promotions, but his efforts fell short and the future of the team in Minnesota was in jeopardy.

In 1991, Norm Green faced a sexual discrimination lawsuit and was the subject of much negative local press. This became the last straw for the owner of the Minnesota North Star franchise. In 1993, the North Stars – along with Modano – made the move to greener pastures south and renamed themselves the Dallas Stars.

On Dec 17, 2000, the Dallas Stars with Mike Modano, returned to the Twin Cities to play against the new Minnesota NHL team, the Minnesota Wild. It was one of the most highly anticipated hockey games in Minnesota in a long time. There was still a lot of animosity toward the Stars franchise, and this match-up became vindication for all former North Star fans. Amazingly, the Wild with their young team handily beat the Dallas Stars 6-0 in front of a raucous crowd at Xcel Energy Center in St. Paul. It was redemption time for professional hockey fans in Minnesota.

Upon his return to the area in 2000, Mike Modano received a few jeers for his earlier remarks about fans in Minnesota, as well as his support for the much chastised Norm Green. But no one can take away Mike Modano’s achievements in the NHL.

Mike Modano is quite simply the finest U.S. born NHL hockey player to date, but thanks to the departure of the Minnesota North Stars in 1993 and Mike Modano, the State of Hockey is now on much more solid foundation for the future.

*UPDATE: Mike Modano (born in Livonia, MI) signed a one year contract for the 2010-11 season with the Detroit Red Wings in the summer of 2010. He officially retired in 2011 and his jersey number (#9) was retired (by the Dallas Stars) on March 8, 2014. It is displayed alongside three other retired jerseys worn by former North Stars Bill Goldsworthy and Bill Masterton, and Neal Broten who played in Minnesota and Dallas.