According to “A History of the City of Saint Paul” By John Fletcher Williams (published in 1847) one of the first settlements in the St. Paul, MN area was located at Fountain Cave, alongside the Mississippi River (not far from where current day Shepard Road and Randolph Ave intersect).

Pierre “Pig’s Eye” Parrant, a retired fur trader and person of dubious reputation, built the area’s first structure known as the “whiskey seller’s cabin” at the mouth of this cave in 1838.  The cave had a very clear, cold stream flowing out of it and into the river.

Parrant was a coarse, ill-looking, low-browed fellow with one good eye. His bad eye had a sinister white ring around the pupil, giving it a kind of piggish expression to his features and he became known as “Pig’s Eye”.

“Pig’s Eye” snuck over territory lines and found this rather convenient spot from which he could sell bootleg whisky to soldiers and Indians without “the pale of law”. In 1838, Parrant erected a cabin at the mouth of the cave to sell liquor from. Locals called the area “Pig’s Eye Landing” based on Parrant’s popular tavern.

His “Pig’s Eye Tavern” flourished, but in 1840 he was evicted by soldiers from nearby Fort Snelling. In 1849, the Minnesota Territory was formalized and shortly thereafter, the areas known as “Pig’s Eye Landing” was renamed to Saint Paul.

After Pig’s Eye’s eviction from this area in 1840, the cave was used as a storehouse and then as a tourist attraction from 1850-1880. As the cave’s popularity increased a pavilion was opened nearby in 1852, which offered refreshments and lights for exploring the cave.

In the late 1800’s, sewage and storm water were discharged through the cave by a railroad facility, reducing the cave’s value as a tourist attraction. Nearby residential development altered the area’s hydrology by filling the wetlands and slowing the flow of Fountain Creek into the cave. Finally, in 1960, the cave’s entrance was buried during the construction of Shepard Road. 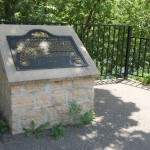 The only visible reminder of Pig’s Eye Landing is a roadside marker alongside Shepard Road, about 1/4 mile southwest of the intersection of Randolph and Shepard Road.